The Most Popular Holiday Destinations for Brits

Inspiration for your next holiday. 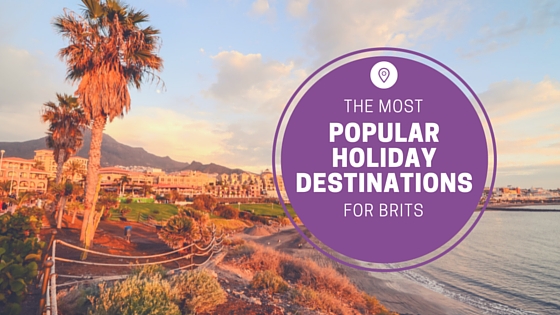 Some resorts around the world have a particular reputation for being popular with British tourists. Whether you want to spend time with your fellow countrymen and women or avoid them at all costs, this post will give you an idea of where Brits are most likely to hang out away from home. There are many ways to measure the popularity of a holiday destination: internet searches, research polls, bookings data or just counting the number of Union Jack swimming trunks on the beach. But whichever way you cut it, Mallorca consistently tops all lists of popular destinations for British travellers. It's easy to see why the Balearic bolthole holds so much appeal for us: it has great beaches, beautiful mountains and activities for families, couples and thrill-seekers alike. While Mallorca has been a victim of its own success in the past, with a reputation for built-up tourist traps, much of it is still undeveloped, and if you head out to the more rural areas you can enjoy a far more traditional island escape. Sticking with a Spanish theme, the Canary Islands are another perennial favourite of sun-seeking Brits, and with an all-year-round warm climate that's less than five hours away by air, it's no wonder these islands are a huge hit. Tenerife is by far the most 'British' of the Canaries, followed by Lanzarote and Gran Canaria. The Canaries and other European sun destinations saw a rise in popularity in 2015, which was in part attributed to the favourable exchange rate, but it was also undoubtedly as result of the islands' plentiful opportunities for holidaymakers of all varieties. Portugal has also long held a strong appeal to British travellers, and the Algarve's stunning beaches, cliff-tops and castles are as big a draw as ever. For those looking for great beaches (and let's face it, we Brits are suckers for the seaside), there are more than 150 to choose from in the country's Southern parts, offering everything from sheltered coves to serious surfing hotspots that harness the wildest Atlantic waves. Perhaps the most beautiful is Praia de Marinha on the South Coast, which combines extraordinary limestone structures with azure waters and pristine golden sand. Best known as the party capital of Europe and the birthplace of the Second Summer of Love, Ibiza offers unrivalled nightlife and copious chill-out opportunities to visitors looking to let their hair down in style. At just 2.5 hours away from the UK by air it's an easy and affordable holiday option that's as well loved for its charming whitewashed villages, sandy coves and pretty pine forests as it is for its legendary club scene and boho appeal. Ibiza looks set to remain a firm favourite among British visitors for many years to come. A firm favourite for those seeking fun and sun, Orlando is the only destination outside Europe to make it into the top ten mos popular destinations for Brits. The Florida city is of course home to Walt Disney World, and if theme parks are your thing you can also pack in visits to Universal Studios, Epcot, and the Wizarding World of Harry Potter. The Kennedy Space Center is also within easy reach of Orlando, and if you want to enjoy the beaches of the sunshine state, Daytona Beach and Cocoa Beach are an hour and a half's drive away. Accommodation here is very family-friendly, and there's no shortage of pools and water parks to help you cool off in the heat. No guide to Brits abroad would be complete without Benidorm, and sure enough, the built-up bolthole comes in at number 8 of the most popular hotspot for GB holidaymakers in 2015. While one might assume that the fortunes of mega resorts like this one might be on the decline, Benidorm actually looks like coming close to matching its highest visitor numbers in a year: 12 million in 1977. The tourists who flock here love the fact that it's predictable: there's no shortage of sun, sand, sea and sangria, a holiday here is cheap, and while the beaches can get crowded, you're more likely to meet families and older couples than the party animal crowd that regularly descends on the 'younger' nightlife destinations like Magaluf. The largest of the Greek islands and one of the most southerly, Crete is an ever-reliable option for UK travellers looking for a warm Mediterranean getaway. Crete is a strong all-rounder, with great options for families, couples and solo travellers - with a great selection of spas, villas and hotels. Crete is also a hiker's paradise, with world-renowned trails like the route that runs through the Samaria Gorge: a vast canyon that stretches from the West of the island to the mouth of the Libyan sea. Finally, the European answer to Walt Disney World and the original Disneyland is attracting a steady stream of British families to Paris every year, making it the most popular city-based destination ahead of Amsterdam. Kids of all ages are queuing up to meet Mickey and Minnie, enjoy the rides and the spectacle of this eminently accessible theme park, which can be done in a day from London if you're short on time.