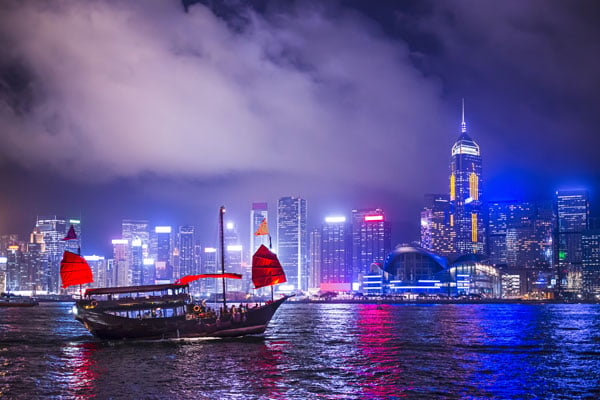 Hong Kong, meaning fragrant harbour, lies on the south eastern coast of China. Described in the 1840s by British settlers as a 'barren rock', this former colony is now the financial centre of the east. More than 70 per cent of Hong Kong's total area is rural, but most visitors come for the department stores, designer boutiques, swanky hotels and bustling open air markets.

Anything from clothes and jewellery to jade and electrical goods can be found in this shopping-mad city. And it's compact with an excellent public transport system so visitors are always within minutes of a shop or a tourist attraction. It's been more than 10 years since Britain handed Hong Kong back to China, and business has never been better.

Every wish can come true here - so it is claimed - provided you make an earnest plea to the gods. Wong Tai Sin is a prime example of a traditional Chinese temple with its red pillars, golden roof, yellow latticework and multi-coloured carvings. This important religious centre is situated in a peaceful spot away from the hustle and bustle of nearby streets.

The majestic Buddha who rests atop Ngong Ping plateau is 34 metres high, weighs 250 tonnes and took more than 10 years to build. He's reached by 268 steps and sits close to the Po Lin Monastery. Also on the island are Disneyland and Ngong Ping 360, a family attraction featuring a 'Walking with Buddha' multimedia display, Monkey's Tale Theatre and Ngong Ping Tea House.

Having been under British rule for many years, Hong Kong is a fascinating collision of Eastern and Western culture. It has an internationally famous film industry and has produced some of the world's top martial arts film stars such as Bruce Lee, Jackie Chan and Chow Yun Fat.

There is a thriving music scene in Hong Kong, catering to a modern pop market as well as traditional, government-supported music.

Media in Hong Kong is well-served by local, foreign and licensed television stations as well as a number of newspapers and magazines. Many of the TV shows produce in Hong Kong are shown across mainland China.

Feng shui still has a big part to play in life in Hong Kong, buildings and business offices are still built with it in mind. Many people in Hong Kong believe correct feng shui helps the prospects for any business moving into a new building or office.

If you're planning on getting around to see the sights in Hong Kong then you'll certainly be best off using their excellent public transport system. Up to 90% of journeys made are made using public transport, the highest in the world.

Most popular among residents is the MTR or Mass Transit Railway. There's also a tram system that runs exclusively double decker trams. Most buses are also double deckers due to the demand for public transport in Hong Kong. The city is also well known for its picturesque ferry routes.

The centre of air travel for Hong Kong is the Hong Kong International Airport. It has been voted the world's best airport seven times in its short 10-year history and is the second busiest airport in the world for cargo traffic.

There is evidence that the area surrounding Hong Kong has an extended prehistory dating as far back as 30,000 years. However it wasn't until 221BC that the area was incorporated into Imperial China under the Qin Dynasty. Hong Kong remained under Chinese rule until the first half of the 19th century.

Following the Opium Wars with the United Kingdom in 1842 Hong Kong was given over to the British Empire. During the initial period of British rule Hong Kong underwent a transformation and modernisation. Electricity and gas along with buses, ferries, trams and an airline were all introduced.

During the first half of the 1940s Hong Kong was occupied by the Japanese, who invaded eight hours after their attack on Pearl Harbor. By the end of the war in 1945 Hong Kong was liberated by British and Chinese troops.

Following the war Hong Kong underwent massive economic growth. During the 1970s corruption was all but wiped out from its police force and the state became one of the least corrupt societies in the world. During the eighties Hong Kong cinema exploded onto the international scene on the back of the success of stars such as Jackie Chan and Chow Yun Fat.

In 1997 Hong Kong was officially handed back to China by the United Kingdom. Despite now being under Chinese rule many things still remain the same. English is still taught in schools, flight borders to mainland China are still considered an international crossing, electrical plugs are the same and cars continue to drive on the left.

The Hong Kong of today is a thriving metropolis and is the world's most vertical city. Hong Kong has 7,650 skyscrapers and the most number of people living and working above the 14th floor.